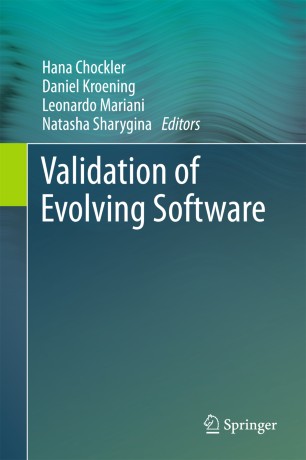 This book describes the methodology and accompanying technology for reducing the costs of validation of changes by introducing automatic techniques to analyze and test software increments. It builds a unified approach to efficient and reliable validation of changes and upgrades, and may be used as a research monograph and a reference book.

Dr. Hana Chockler received her Ph.D. in Computer Science from the Hebrew University of Jerusalem in 2003. She is a member of the Software Modelling and Applied Logic Group in King's College, London, UK; she previously worked in the formal methods group at IBM Haifa Research Labs. She has particular expertise in coverage metrics and their extension to quality metrics; her broader research interests include formal verification, model-checking of hardware and software; coverage and vacuity in formal verification; causality, responsibility and its relation to formal methods; explanation of counterexamples and the cross-entropy method for testing.

Prof. Daniel Kroening received his Ph.D. in Computer Science from Saarland University in 2001. He was an assistant professor at ETH Zurich in 2004–2007, he is now a professor in the Dept. of Computer Science at the University of Oxford. His areas of interest include model checking, decision procedures and software analysis. A feature of his work is frequent interaction with industrial partners, such as Microsoft Research, Intel Research, Toyota Motors, Ford, and Airbus UK.

Dr. Leonardo Mariani received his Ph.D. in Computer Science at the University of Milano Bicocca in 2005, where he is currently a researcher, collaborating with the Laboratory of Test and Analysis. His research interests include the test and analysis of component-based systems, inference of behavioural models, dynamic analysis, test and analysis of service-based applications, design of self-healing solutions and the design and development of autonomous and adaptive systems.

Prof. Natasha Sharygina received her Ph.D. from the University of Texas at Austin. She is the head of the Formal Verification lab at the University of Lugano (USI) and an adjunct professor at Carnegie Mellon University. She is an expert in the field of formal verification, static analysis and system design. Her lab creates both theoretical frameworks and practical tools to enable sound, scalable verification of industrial-size systems and they collaborate with industrial partners such as IBM Haifa, Cadence, Intel and ABB.