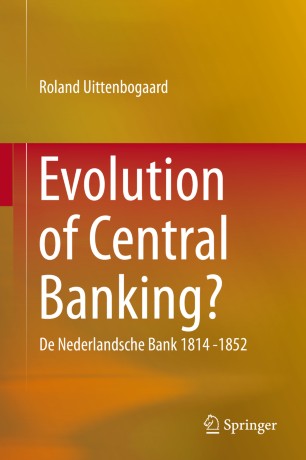 The book analyses the establishment of De Nederlandsche Bank and its early development as a case study to test competing theories on the historical development of central banking. It is shown that the establishment of DNB can be explained by both the fiscal theory and the financial stability theory. Later development makes clear that the financial stability role of DNB prevailed. DNB´s bank notes were not forced onto the public and competition was fierce. A prudent and independent stance was necessary to be able to play its intended role. This meant that DNB played a modest role in the Amsterdam money market until 1852. By 1852 it had established itself to become the central bank. By then its bank notes had become generally accepted and it could start to operate as a reserve bank. Also the market context had changed dramatically, its competitors had been driven out of the market and several credit institutions had become customers of DNB.

"On the occasion of the Nederlandsche Bank's 200th Anniversary, it is good to have a new, and an extremely good, history of its founding and first fifty years of operation. The only previous account of this period of the DNB's history was legalistic and did not sufficiently place the Bank´s development in its wider context. Uittenbogaard's book provides a much broader, and better, story of the personnel, economics, and finance of the DNB at this juncture." - Charles Goodhart, LSE.