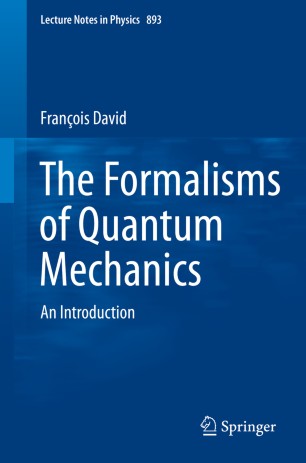 The Formalisms of Quantum Mechanics

These lecture notes present a concise and introductory, yet as far as possible coherent, view of the main formalizations of quantum mechanics and of quantum field theories, their interrelations and their theoretical foundations.

The “standard” formulation of quantum mechanics (involving the Hilbert space of pure states, self-adjoint operators as physical observables, and the probabilistic interpretation given by the Born rule) on one hand, and the path integral and functional integral representations of probabilities amplitudes on the other, are the standard tools used in most applications of quantum theory in physics and chemistry. Yet, other mathematical representations of quantum mechanics sometimes allow better comprehension and justification of quantum theory. This text focuses on two of such representations: the algebraic formulation of quantum mechanics and the “quantum logic” approach. Last but not least, some emphasis will also be put on understanding the relation between quantum physics and special relativity through their common roots - causality, locality and reversibility, as well as on the relation between quantum theory, information theory, correlations and measurements, and quantum gravity.

Quantum mechanics is probably the most successful physical theory ever proposed and despite huge experimental and technical progresses in over almost a century, it has never been seriously challenged by experiments. In addition, quantum information science ha

s become an important and very active field in recent decades, further enriching the many facets of quantum physics. Yet, there is a strong revival of the discussions about the principles of quantum mechanics and its seemingly paradoxical aspects: sometimes the theory is portrayed as the unchallenged and dominant paradigm of modern physical sciences and technologies while sometimes it is considered a still mysterious and poorly understood theory, waiting for a revolution. This volume, addressing graduate students and seasoned researchers alike, aims to contribute to the reconciliation of these two facets of quantum mechanics.