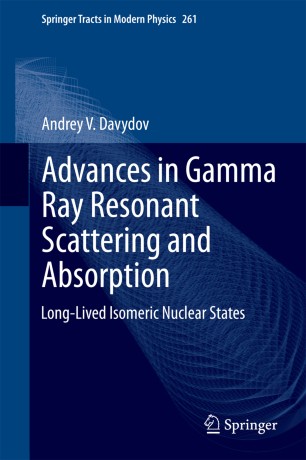 This book presents the basics and advanced topics of research of gamma ray physics. It describes measuring of  Fermi surfaces with gamma resonance spectroscopy and the theory of angular distributions of resonantly scattered gamma rays. The dependence of excited-nuclei average lifetime on the shape of the exciting-radiation spectrum and electron binding energies in the spectra of scattered gamma rays is described. Resonant excitation by gamma rays of nuclear isomeric states with long lifetime leads to the emission and absorption lines. In the book, a new gamma spectroscopic method, gravitational gamma spectrometry, is developed. It has a resolution hundred million times higher than the usual Mössbauer spectrometer. Another important topic of this book is resonant scattering of annihilation quanta by nuclei with excited states in connection with positron annihilation. The application of the methods described is to explain the phenomenon of Coulomb fragmentation of gamma-source molecules and resonant scattering of annihilation quanta to study the shape of Fermi surfaces of metals.