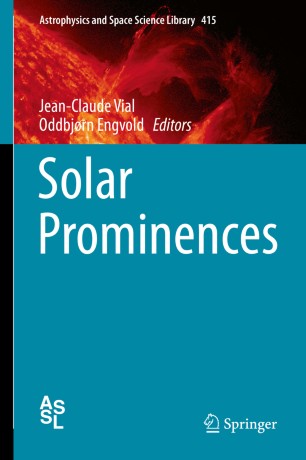 In 1875 solar prominences, as seen out of the solar limb, were described by P.A. Secchi in his book Le Soleil as "gigantic pink or peach-flower coloured flames". The development of spectroscopy, coronagraphy and polarimetry brought tremendous observational advances in the twentieth century. The authors present and discuss exciting new challenges (resulting from observations made by space and ground-based telescopes in the 1990s and the first decade of the 21st century) concerning the diagnostics of prominences, their formation, their life time and their eruption along with their impact in the heliosphere (including the Earth).

The book starts with a general introduction of the prominence “object” with some historical background on observations and instrumentation. In the next chapter, the various forms of prominences are described with a thorough attempt of classification. Their thermodynamic (and velocity) properties are then derived with emphasis on the methods (and their limits) used. This goes from the simplest optically thin case to the heavy radiative treatment of plasmas out of local thermodynamic equilibrium. The following chapters are devoted to the magnetic field measurements and indirect derivation. A new branch of diagnostic tools, the seismology, is presented along with some MHD basics. This allows to better understand the propagation of waves, the energy and force equilibria. Both small-scale and large-scale studies and their relationship are presented. The importance of the newly discovered cavities is stressed in the context of prominence destabilization. The issues of prominence formation and eruption, their connection with flares and Coronal Mass Ejections and their impact on the Earth are addressed on the basis of the latest results. Finally, an exciting new area of research is unveiled with the newly discovered evidence of similar manifestations in the Universe and their possible impact on the habitability of exoplanets.

References to the basic physics (where necessary) are provided and the proposed web sites addresses will allow the reader to load exciting movies.The book is aimed at advanced students in astrophysics, post-graduates, solar physicists and more generally astrophysicists. Amateurs will enjoy the many new images which go with the text.

Jean-Claude Vial has been involved in Space Solar Physics for more than fourty-five years. He was Co-Investigator on several NASA satellite missions and space probes. He is also involved in the EUI and SPICE instrumentations for future ESA Solar Orbiter mission.
He was scientific director of the Multi Experiment Data and Operations Center for SOHO in Europe until the end of 2000 and Head of the Solar and Stellar Group at I.A.S. until January 2005.
He proposed various space solar missions in the frame of the C.N.E.S. microsatellite program, e.g. LYOT on-board the SMESE satellite, and in 2009, the LYOT-based ECLIPSE instrumentation in the frame of the ESA Proba 3 program.
His main research interests are solar prominences, the chromosphere and transition  region, the solar corona.
He is now Directeur de Recherche Emerite of C.N.R.S.
Oddbjørn Engvold is Professor emeritus of the Institute of Theoretical Astrophysics, University of Oslo. His main field of research and teaching has been on the physics of Sun and stars. His research has involved solar and stellar dynamics and magnetic activity; with special interest in solar prominences. From 2003 to 2006 he was General Secretary of the IAU. Prof. Engvold was an editor of the journal Solar Physics and is a member of the editorial board of Solar Physics and the book series Astrophysics and Space Science Library.