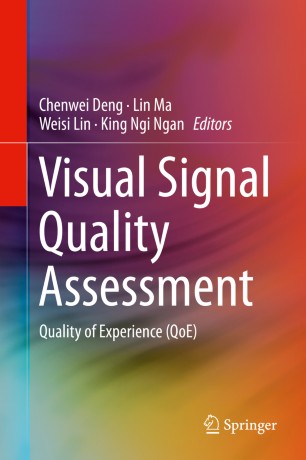 This book provides comprehensive coverage of the latest trends/advances in subjective and objective quality evaluation for traditional visual signals, such as 2D images and video, as well as the most recent challenges for the field of multimedia quality assessment and processing, such as mobile video and social media. Readers will learn how to ensure the highest storage/delivery/ transmission quality of visual content (including image, video, graphics, animation, etc.) from the server to the consumer, under resource constraints, such as computation, bandwidth, storage space, battery life, etc.

Lin Ma received his Ph.D. degree in Department of Electronic Engineering at the Chinese University of Hong Kong in 2013. He received the B. E., and M. E. degrees from Harbin Institute of Technology, Harbin, China, in 2006 and 2008, respectively, both in computer science. He is currently a Researcher in Huawei Noah’s Ark Lab, Hong Kong. He got the best paper award in Pacific-Rim Conference on Multimedia 2008. He was awarded the Microsoft Research Asia fellowship in 2011. He was a finalist to HKIS young scientist award in engineering science in 2012. His research interests include visual quality assessment, super-resolution, restoration, compression.

Weisi Lin received the Ph.D. degree from King’s College, London University, London, U.K. He is currently an Associate Professor and Associate Chair (Graduate Studies) with the School of Computer Engineering, Nanyang Technological University, Singapore. He has published over 270 refereed papers at international journals and conferences. His current research interests include image processing, visual quality evaluation and perception-inspired signal modeling. He is a senior member of IEEE, and a fellow of IET.

King Ngi Ngan received the Ph.D. degree in electrical engineering from Loughborough University, Loughborough, U.K. He is currently a Chair Professor with the Department of Electronic Engineering, Chinese University of Hong Kong, Shatin, Hong Kong. He holds honorary and visiting professorships with numerous universities in China, Australia, and South East Asia. He has published extensively, including three authored books, six edited volumes, over 300 refereed technical papers, and has edited nine special issues in journals. He holds ten patents in image or video coding and communications. He is a fellow of IEEE, IET and IEAust.