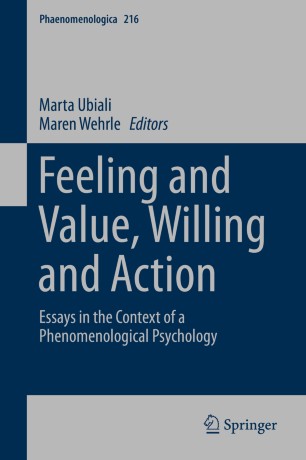 Feeling and Value, Willing and Action

Essays in the Context of a Phenomenological Psychology

This volume explores the role and status of phenomena such as feelings, values, willing, and action in the domain of perception and (social) cognition, as well as the way in which they are related. In its exploration, the book takes Husserl’s lifelong project Studien zur Struktur des Bewusstseins (1909-1930) as its point of departure, and investigates these phenomena with Husserl but also beyond Husserl. Divided into two parts, the volume brings together essays that address the topics from different phenomenological, philosophical, and psychological perspectives. They discuss Husserl’s position in dialogue with historical and recent philosophical and psychological debates and develop phenomenological accounts and descriptions with the help of Geiger, Heidegger, Merleau-Ponty, Plessner, Sartre, Scheler, Schopenhauer, and Reinach.