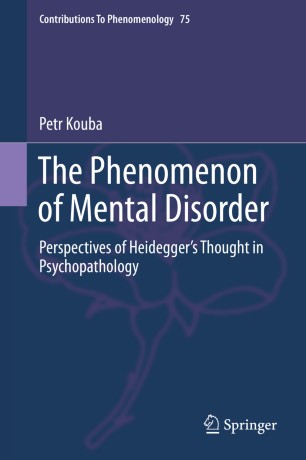 The Phenomenon of Mental Disorder

Perspectives of Heidegger’s Thought in Psychopathology

Part of the Contributions To Phenomenology book series (CTPH, volume 75)

This book provides a critical introduction to Heidegger’s impact on psychiatry and psychology, and has a focus on the application of his philosophy to psychiatry. This is a complete revision of Heidegger’s existential philosophy in the light of psychopathological phenomena. Readers will find here a philosophical inquiry into the problem of mental disorder, which shows Heidegger’s own philosophy in a new light, uncovering both its strengths and its weak points. The author maps not only Heidegger’s interaction with psychiatric thought, as depicted in his Zollikon Seminars, but also his influence on Swiss phenomenological psychiatry. The work treats Heidegger in a critical way, taking the phenomenon of mental disorder as a touchstone on which Heidegger’s thought is tested. The results of such a critical examination are important, not only for a better understanding of psychopathological phenomena, but also for a new understanding of Heidegger’s approach to human existence. This work treats the phenomenon of mental disorder as a philosophical problem that reflects the ontological character of human existence. Heidegger’s approach to mental disorder is confronted with the conceptions of Foucault, Deleuze and Guattari in a novel way. The book is more than just an historical overview as it highlights the limits of phenomenological thought in the area of psychiatry and it shows a possible way of moving beyond them. This is a philosophical work with an interdisciplinary range. Scholars of philosophy and those in the growing field of philosophy of psychiatry, as well as those with an interest in Heidegger Studies will be particularly interested in this work.