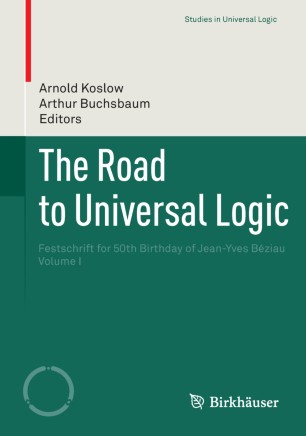 The Road to Universal Logic

Festschrift for 50th Birthday of Jean-Yves Béziau Volume I

This is the first volume of a collection of papers in honor of the fiftieth birthday of Jean-Yves Béziau. These 25 papers have been written by internationally distinguished logicians, mathematicians, computer scientists, linguists and philosophers, including Arnon Avron, John Corcoran, Wilfrid Hodges, Laurence Horn, Lloyd Humbertsone, Dale Jacquette, David Makinson, Stephen Read, and Jan Woleński. It is a state-of-the-art source of cutting-edge studies in the new interdisciplinary field of universal logic. The papers touch upon a wide range of topics including combination of logic, non-classical logic, square and other geometrical figures of opposition, categorical logic, set theory, foundation of logic, philosophy and history of logic (Aristotle, Avicenna, Buridan, Schröder, MacColl).

This book offers new perspectives and challenges in the study of logic and will be of interest to all students and researchers interested the nature and future of logic.