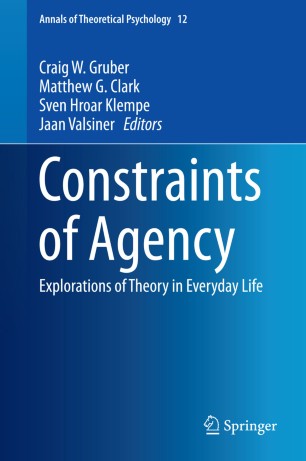 Explorations of Theory in Everyday Life

This book explores the basic concept of agency and develops it further in psychology, using it to better understand and explain psychological processes and behavior. More importantly, this book seeks to put an emphasis on the role of agency in four distinct settings: history of psychology, neuroscience, psychology of religion, and socio-cultural theories of co-agency. In Volume 12 of the Annals of Theoretical Psychology, the contributors will explore a number of new ways to look at agency in psychology. This volume seeks to develop a systematic theory of axioms for agency. It describes implications for research and practice that are founded on an understanding of the person as an actor in the world. This book also has implications for research and practice across psychology’s sub-fields, uniting the discipline through an agentic view of the person.

Craig Gruber is a social and developmental psychologist who is a lecturer at Northeastern University. He earned his BA from American University, an MS from Johns Hopkins University and his Ph.D. from Clark University. His research and theoretical interests reside in the area of courage, personal agency and educational settings. Another primary area of interest for Craig is his interest in the teaching of psychology, especially in developing curricula and the application of psychological theory in the classroom. In addition his writing interests involve psychology’s history as a resource of ideas for contemporary advancement of the theory and teaching. He is the co-author of Psychology, AP* Edition(PEARSON) with Phillip Zimbardo and founding editor of the Whitman Journal of Psychology, a high school journal of student research and writing. He has also published in Integrative Psychological and Behavioral Science, Culture and Psychology and Teaching of Psychology.

Matthew G. Clark is a behavioral neuroscientist at the Department of Behavioral Sciences and Leadership at the United States Military Academy at West Point, New York. He received a B.A. in Psychology from Coe College, Cedar Rapids, Iowa, and a Ph.D. in Behavioral and Neural Sciences from Rutgers University in 2000. As a behavioral neuroscientist he conducted research on developmental language disorders, learning, motivation, psychopharmacology, and medical countermeasures against chemical warfare nerve agents. In 2002, his research was recognized as the top research at the Singapore International Symposium on Protection Against Toxic Substances (SISPAT). He worked urgent medical and military science and technology issues at various locations around the world, including in a theater of combat. He has published six book chapters across these various areas, including contributions to the “Textbook of Military Medicine, Medical Aspects of Chemical Warfare”, “The 71F Advantage: Applying Army Research Psychology for Health and Performance Gains” and “Pharmacological Perspectives of Toxic Chemicals and Their Antidotes.” He also has over 25 refereed publications and professional reports.

Sven Hroar Klempe is associate Professor in Psychology at the Department of Psychology, NTNU, Trondheim, but he has also a background as full Professor in Musicology, Ass. Prof. in Media Studies, teacher, journalist and music critic. His educational background is diverse and primarily from Norway, but also from France. His research is cross-disciplinary with an emphasis on theory of science, communication and the history of psychology.

Jaan Valsiner is the Niels Bohr Professor of Cultural Psychology at Aalborg University in Denmark. He is the founding editor (1995) of the Sage journal Culture & Psychology and Editor-in-Chief of Integrative Psychological and Behavioral Sciences (Springer, 2007). In 1995 he was awarded the Alexander von Humboldt Prize for his interdisciplinary work on human development.