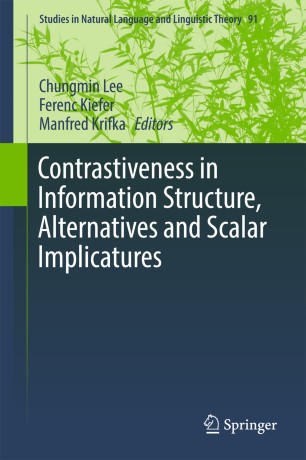 A group of authors containing both leading authorities and young researchers addresses a number of issues of contrastiveness, polarity items and exhaustivity, quantificational expressions and the implicatures they generate, and the interaction between semantic operators and speech acts. The 19 contributions provide insights on the interplay between semantics and pragmatics. The volume’s reach is cross-linguistic and takes an unorthodox multi-paradigm approach. Languages studied range from European languages including Hungarian and Russian to East Asian languages such as Japanese and Korean, with rich data on focus and discourse particles. This volume contributes to a major area of research in linguistics of the last decade, and provides novel, state-of-the-art views on some of the central topics in linguistic research, and will appeal to an audience of graduate and advanced undergraduate researchers in linguistics, philosophy of language and computational linguistics.