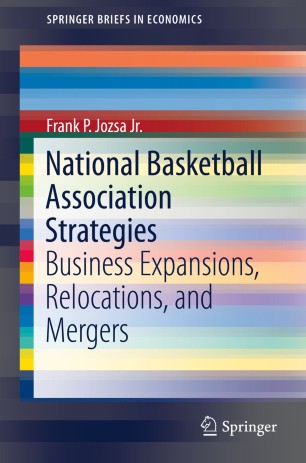 Part of the SpringerBriefs in Economics book series (BRIEFSECONOMICS, volume 84)

This Brief identifies and contrasts the groups of National Basketball Association (NBA) expansion franchises and of any teams that relocated from one metropolitan area or city to another from 1950 to 2013. It discusses historical differences and similarities in the teams’ markets and performances and then as members of divisions and conferences. It measures and compares the emergence, development, and success of the teams by analyzing demographic, economic and sport-specific data. It also discusses the respective mergers of the Basketball Association of America and National Basketball League in 1949, and the American Basketball Association and National Basketball Association in 1976. National Basketball Association Strategies makes an important, relevant, and useful contribution to the literature regarding professional sports operations and to the NBA’s short and long run business strategies in American culture. Besides numerous sports fans within metropolitan areas and extended markets of these NBA teams, the book’s audiences are sports historians and researchers, college and public libraries, and current and potential NBA franchise owners and team executives. This Brief may also be used as a reference or supplemental text for college and university students enrolled in such applied undergraduate and graduate courses and seminars as sports administration, sports business, and sports management.