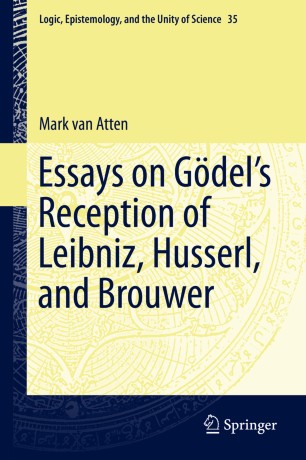 Essays on Gödel’s Reception of Leibniz, Husserl, and Brouwer

Part of the Logic, Epistemology, and the Unity of Science book series (LEUS, volume 35)

This volume tackles Gödel's two-stage project of first using Husserl's transcendental phenomenology to reconstruct and develop Leibniz' monadology, and then founding classical mathematics on the metaphysics thus obtained. The author analyses the historical and systematic aspects of that project, and then evaluates it, with an emphasis on the second stage.

The book is organised around Gödel's use of Leibniz, Husserl and Brouwer. Far from considering past philosophers irrelevant to actual systematic concerns, Gödel embraced the use of historical authors to frame his own philosophical perspective. The philosophies of Leibniz and Husserl define his project, while Brouwer's intuitionism is its principal foil: the close affinities between phenomenology and intuitionism set the bar for Gödel's attempt to go far beyond intuitionism.

The four central essays are `Monads and sets', `On the philosophical development of Kurt Gödel', `Gödel and intuitionism', and `Construction and constitution in mathematics'. The first analyses and criticises Gödel's attempt to justify, by an argument from analogy with the monadology, the reflection principle in set theory. It also provides further support for Gödel's idea that the monadology needs to be reconstructed phenomenologically, by showing that the unsupplemented monadology is not able to found mathematics directly. The second studies Gödel's reading of Husserl, its relation to Leibniz' monadology, and its influence on his publishe

d writings. The third discusses how on various occasions Brouwer's intuitionism actually inspired Gödel's work, in particular the Dialectica Interpretation. The fourth addresses the question whether classical mathematics admits of the phenomenological foundation that Gödel envisaged, and concludes that it does not.

The remaining essays provide further context.  The essays collected here were written and published over the last decade. Notes have been added to record further thoughts, changes of mind, connections between the essays, and updates of references.

Mark van Atten is senior researcher at the Centre national de la recherche scientifique in France. His research interests are philosophy of mathematics and idealism.

“Mark van Atten in this author-edited volume brings together eleven previously published or at time of writing about to independently appear essays in the history of the phenomenology of mathematics. … Van Atten’s studies … are extraordinarily rich in exploring the book’s chosen topics. … reader is strongly recommended to take up this detailed examination of Gödel’s selective reading in logic-related branches of phenomenological philosophy, as much for the questions it provokes as its detailed authoritative analysis of historical-philosophical themes.” (Dale Jacquette, Phenomenological Reviews, reviews.ophen.org, April, 2016)

“If van Atten is right on this, and he sets out a strong case for it, then the combination of Gödel’s ideas and phenomenology was ... still born.” (Prof. Dr.Manuel Bremer, Phenomenological Reviews, reviews.ophen.org, January, 2016)

“The book collects together most of the essays on Kurt Gödel that Mark van Atten has either authored or co-authored. … Atten’s work is a remarkably rich, careful and detailed scholarly masterpiece. The chapters form a unified philosophical picture in which the chapters necessitate each other, hence a collection of the articles is well justified. … The book will be a classic, worth returning to time and again.” (M. Hartimo, History and Philosophy of Logic, October, 2015)

“This book is a beautiful example of genuine Gödel scholarship by an author who is quite rightly recognized as an authority in the field, and thus it is an important contribution that cannot be ignored.” (Jean Paul Van Bendegem, Notre Dame Philosophical Reviews, ndpr.nd.edu, July, 2015)