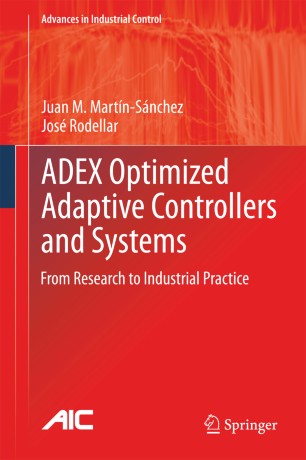 From Research to Industrial Practice

This book is a didactic explanation of the developments of predictive, adaptive predictive and optimized adaptive control, including the latest methodology of adaptive predictive expert (ADEX) control, and their practical applications. It is focused on the stability perspective, used in the introduction of these methodologies, and is divided into six parts, with exercises and real-time simulations provided for the reader as appropriate.

ADEX Optimized Adaptive Controllers and Systems begins with the conceptual and intuitive knowledge of the technology and derives the stability conditions to be verified by the driver block and the adaptive mechanism of the optimized adaptive controller to guarantee achievement of desired control performance. The second and third parts are centered on the design of the driver block and adaptive mechanism, which verify these stability conditions. The authors then proceed to detail the stability theory that supports predictive, adaptive predictive and optimized adaptive control methodologies. Benchmark applications of these methodologies (distillation column, pulp-factory bleaching plant and flexible structures) are treated next with a focus on practical implementation issues. The final part of the book describes ADEX platforms, and illustrates their use in the design and implementation of optimized adaptive control systems in three different challenging-to-control industrial processes:

The presentation is completed by a number of appendices containing technical background associated with the main text, including a manual for the first ADEX COP platform developed to exploit the capabilities of adaptive predictive control in real plants.

ADEX Optimized Adaptive Controllers and Systems provides practicing process control engineers with a multivariable optimized control solution which is adaptive and resistant to changes in process dynamics, perturbations and the effects of noise. Its pedagogical features also facilitate its use as a teaching tool for formal university and Internet-based open-education-type graduate courses in practical optimized adaptive control and for self-study.

Juan M. Martín-Sánchez obtained the title of Industrial Engineer in 1970, and Doctor Industrial Engineer in 1974, both from the Polytechnic University of Catalunya (UPC). From 1971 to 1976, his research activities were continued at Grenoble and Toulouse Universities in France, at the Massachusetts Institute of Technology and the Charles Stark Draper Laboratory in the United States, and the University of Alberta in Canada. In 1976, he filed the first patent for predictive and adaptive predictive control, and subsequently he obtained 3 additional international patents for both control methodologies. In 1986, he founded the company SCAP Europa which went on to carry out more than 150 industrial applications of the adaptive predictive control methodology between 1986 and 1998. In 1999 Martín-Sánchez founded the company Adaptive Predictive Expert Control ADEX S.L., of which he is currently the President. This company develops optimization projects based on adaptive predictive expert control in industrial areas such as chemical, petrochemical, energy, cement, metallurgy, naval, aerospace, environment and climate control. He has authored more than 100 publications and three books on adaptive predictive control, has given plenary sessions at important international conferences, seminars and congresses, and has been a member of the editorial board of the International Journal of Control. He has been a professor at the UPC, the University of Alberta and the Universidad Politécnica de Madrid. In addition to his role as President at ADEX, S.L., he is also currently a full professor at the Universidad Nacional de Educación a Distancia (UNED) in Madrid (Open University of Spain). Between January 2004 and January 2009, he has been President of the IEEE Joint Spanish Chapter of the Industrial Applications Society (IAS) and the Control Systems Society (CCS). In 2005 and 2007 under his Presidency, the Chapter organized two Seminars of Advanced Industrial Control Applications (SAICA). These events took place with great success in the “Fundación Gómez-Pardo” in Madrid. In January 2009, Dr. Martín-Sánchez was elevated to the grade of IEEE Fellow for his “Contributions to the Adaptive Predictive Control methodologies”. During 2010 and 2011 was a Distinguished Lecturer of IEEE and, at present, a Prominent Lecturer. As Guest Editor, he prepared a Special Issue on Industrial Optimized Adaptive Control of the International Journal of Adaptive Control and Signal Processing that was published in October 2012.