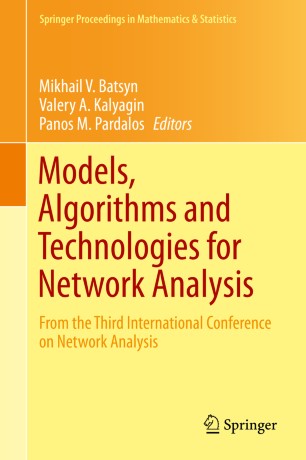 From the Third International Conference on Network Analysis

This volume compiles the major results of conference participants from the "Third International Conference in Network Analysis" held at the Higher School of Economics, Nizhny Novgorod in May 2013, with the aim to initiate further joint research among different groups. The contributions in this book cover a broad range of topics relevant to the theory and practice of network analysis, including the reliability of complex networks, software, theory, methodology, and applications.

Network analysis has become a major research topic over the last several years. The broad range of applications that can be described and analyzed by means of a network has brought together researchers, practitioners from numerous fields such as operations research, computer science, transportation, energy, biomedicine, computational neuroscience and social sciences. In addition, new approaches and computer environments such as parallel computing, grid computing, cloud computing, and quantum computing have helped to solve large scale network optimization problems.