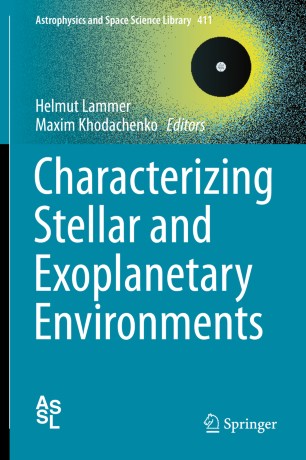 In this book an international group of specialists discusses studies of exoplanets subjected to extreme stellar radiation and plasma conditions. It is shown that such studies will help us to understand how terrestrial planets and their atmospheres, including the early Venus, Earth and Mars, evolved during the host star’s active early phase. The book presents an analysis of findings from Hubble Space Telescope observations of transiting exoplanets, as well as applications of advanced numerical models for characterizing the upper atmosphere structure and stellar environments of exoplanets. The authors also address detections of atoms and molecules in the atmosphere of “hot Jupiters” by NASA’s Spitzer telescope. The observational and theoretical investigations and discoveries presented are both timely and important in the context of the next generation of space telescopes.

The book is divided into four main parts, grouping chapters on exoplanet host star radiation and plasma environments, exoplanet upper atmosphere and environment observations, exoplanet and stellar magnetospheres, and exoplanet observation and characterization. The book closes with an outlook on the future of this research field.

Helmut Lammer is an internationally recognised specialist in planetary atmosphere formation and planetary habitability.
He and Maxim Khodachenko are researchers at the Space Research Institute of the Austrian Academy of Sciences.