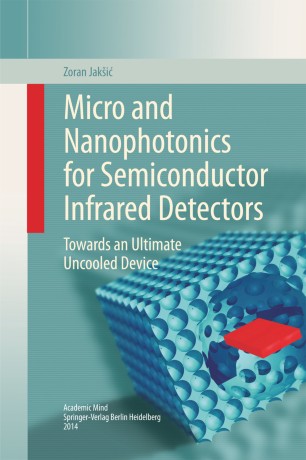 Towards an Ultimate Uncooled Device

The advent of microelectromechanic system (MEMS) technologies and nanotechnologies  has resulted in a multitude of structures and devices with ultracompact dimensions and with vastly enhanced or even completely novel properties. In the field of photonics it resulted in the appearance of new paradigms, including photonic crystals that exhibit photonic bandgap and represent an optical analog of semiconductors and metamaterials that have subwavelength features and may have almost arbitrary values of effective refractive index, including those below zero. In addition to that, a whole new field of plasmonics appeared, dedicated to the manipulation with evanescent, surface-bound electromagnetic waves and offering an opportunity to merge nanoelectronics with all-optical circuitry. In the field of infrared technologies MEMS and nanotechnologies ensured the appearance of a new generation of silicon-based thermal detectors with properties vastly surpassing the conventional thermal devices. However, another family of infrared detectors, photonic devices based on narrow-bandgap semiconductors, has traditionally been superior to thermal detectors. Literature about their micro and nanophotonic enhancement has been scarce and scattered through journals. This book offers the first systematic approach to numerous different MEMS and nanotechnology-based methods available for the improvement of photonic infrared detectors and points out to a path towards uncooled operation with the performance of cryogenically cooled devices. It is shown that a vast area for enhancement does exists and that photonic devices can readily keep their leading position in infrared detection. The various methods and approaches described in the book are also directly applicable to different other types of photodetectors like solar cells, often with little or no modification.

Zoran Jakšić was born in 1960 in Pancevo, Serbia. He received his Dipl.-Ing., Mag. Sci. and Ph.D. degrees in electrical engineering – engineering physics from the School of Electrical Engineering, University of Belgrade, Serbia. His interest are nano photonics and nano plasmonics including electromagnetic metamaterials, subwavelength plasmonic crystals and photonic bandgap structures, NEMS and MEMS sensors and infrared photodetectors. He authored nearly 300 peer-reviewed publications, including 66 international journal papers, an international monograph and 3 book chapters. He is a full research professor and the science director of the Center of Microelectronic Technologies, a department of the Institute of Chemistry, Technology and Metallurgy, University of Belgrade, Serbia. He is the President Elect of the Optical Society of Serbia and the Programme Chair of the ETRAN Society, the oldest and the most prestigious Serbian professional society. He is a Senior Member of the IEEE and a member of the Optical Society of America.