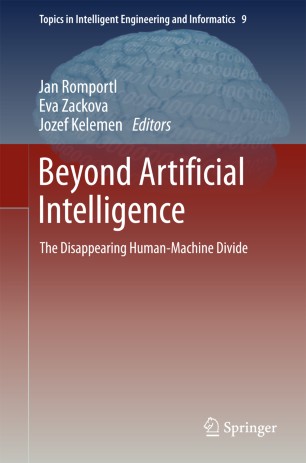 Part of the Topics in Intelligent Engineering and Informatics book series (TIEI, volume 9)

This book is an edited collection of chapters based on the papers presented at the conference “Beyond AI: Artificial Dreams” held in Pilsen in November 2012. The aim of the conference was to question deep-rooted ideas of artificial intelligence and cast critical reflection on methods standing at its foundations.

Artificial Dreams epitomize our controversial quest for non-biological intelligence, and therefore the contributors of this book tried to fully exploit such a controversy in their respective chapters, which resulted in an interdisciplinary dialogue between experts from engineering, natural sciences and humanities.

While pursuing the Artificial Dreams, it has become clear that it is still more and more difficult to draw a clear divide between human and machine. And therefore this book tries to portrait such an image of what lies beyond artificial intelligence: we can see the disappearing human-machine divide, a very important phenomenon of nowadays technological society, the phenomenon which is often uncritically praised, or hypocritically condemned. And so this phenomenon found its place in the subtitle of the whole volume as well as in the title of the chapter of Kevin Warwick, one of the keynote speakers at “Beyond AI: Artificial Dreams”.