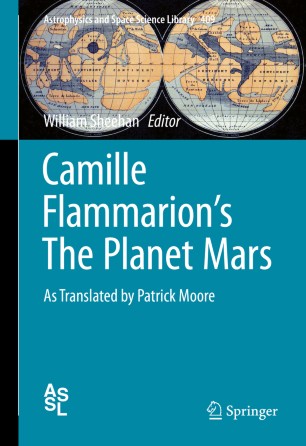 As Translated by Patrick Moore

Camille Flammarion (1842-1925) began his career at 16 as a human computer under the great mathematician U. J. J. Le Verrier at the Paris Observatory.  He soon tired of the drudgery; he was drawn to more romantic vistas, and at 19 wrote a book on an idea that he was to make his own—the habitability of other worlds.  There followed a career as France’s greatest popularizer of astronomy, with over 60 titles to his credit.  An admirer granted him a chateau at Juvisy-sur-l’Orge, and he set up a first-rate observatory dedicated to the study of the planet Mars. Finally, in 1892, he published his masterpiece, La Planete Mars et ses conditions d’habitabilite, a comprehensive summary of three centuries’ worth of literature on Mars, much of it based on his own personal research into rare memoirs and archives.  As a history of that era, it has never been surpassed, and remains one of a handful of indispensable books on the red planet.

Sir Patrick Moore (1923-2012) needs no introduction; his record of popularizing astronomy in Britain in the 20th century equaled Flammarion’s in France in the 19th century.  Moore pounded out hundreds of books as well as served as presenter of the BBC’s TV program “Sky at Night” program for 55 years (a world record).  Though Moore always insisted that the Moon was his chef-d’oeuvre, Mars came a close second, and in 1980 he produced a typescript of Flammarion’s classic.  Unfortunately, even he found the project too daunting for his publish

ers and passed the torch of keeping the project alive to a friend, the amateur astronomer and author William Sheehan, in 1993. Widely regarded as a leading historian of the planet Mars,  Sheehan has not only meticulously compared and corrected Moore’s manuscript against Flammarion’s original so as to produce an authoritative text, he has  added an important introduction showing the book’s significance in the history of Mars studies.  Here results a book that remains an invaluable resource and is also a literary tour-de-force, in which the inimitable style of Flammarion has been rendered in the equally unique style of Moore.

William Sheehan is an amateur astronomer (and professionally, a neuroscientist and psychiatrist specializing in neurodevelopment and brain imaging). He has written Planets and Perception (an Astronomical Society of the Pacific Book of the Year, 1988), The Planet Mars (a book-of-the-month club selection in 1996), and Mars: the lure of the red planet (with Stephen James O’Meara), among many other books. In 2004, Sheehan was awarded the Gold Medal of the Oriental Astronomical Society for his Mars studies; he was the first Caucasian to receive this prestigious award. He has for many years been a contributing editor of Sky & Telescope and is a research fellow of the Lowell Observatory in Flagstaff, Arizona.

“The book now reviewed is volume I of Flammarion’s classic. … The quality of reproduction is excellent, and both editor and publisher must be commended for their achievement. … I have no hesitation in recommending it wholeheartedly.” (Richard McKim, The Observatory, Vol. 135 (1249), December, 2015)

“Flammarion, a noted French astronomer of the late 19th century, wrote this seminal review of the research relating to Mars in 1892. … Flammarion synthesized the many sets of observations and drew conclusions about the physical characteristics of Mars and the likelihood that the planet can support life. Historians might consider this discussion a good example of the scientific method of the period. Summing Up: Recommended. Researchers/faculty and professionals/practitioners.” (D. E. Hogg, Choice, Vol. 52 (12), August, 2015)