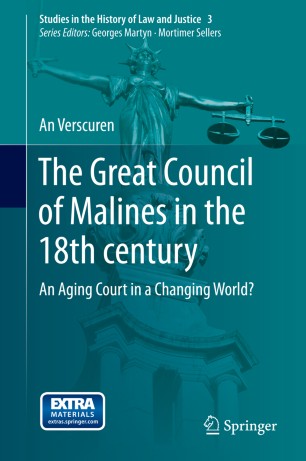 The Great Council of Malines in the 18th century

An Aging Court in a Changing World?

Part of the Studies in the History of Law and Justice book series (SHLJ, volume 3)

This work studies the Great Council of Malines as an institution. It analyzes the Council’s internal organization and staff policy, its position within the broader society of the Austrian Netherlands, the volume and nature of litigation at the Council, and its final years and ultimate demise in the late 18th and early 19th century. By means of this institutional study, this volume provides insight into the role played by the Great Council in the process of state-building in the 18th century Austrian Netherlands. While superior courts were once considered to be the prime agencies of change in the Early Modern Period, tools par excellence for the sovereigns’ striving towards centralization and superiority, their position in the 18th century has so far been barely touched upon. This work focuses specifically on the 18th century supreme court of the Austrian Netherlands, and provides a broad overview with attention to other aspects of the tribunal's functioning and to its role in 18th century attempts at state formation.