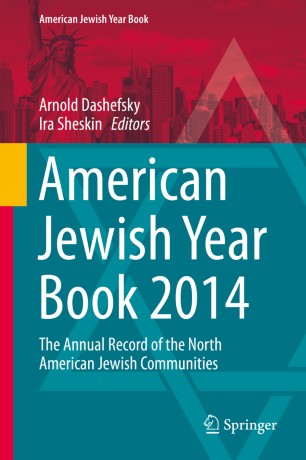 The Annual Record of the North American Jewish Communities

If you have enough budget for one book depicting American Jewish Life, order the American Jewish Year Book.  This is the “go to” reference book for anyone who wishes to explore and understand more about life in the American Jewish community today.
Rela Mintz Geffen, President Emerita, Baltimore Hebrew University; Professor Emerita of Sociology, Gratz College

The American Jewish Year Book is an essential resource for anyone who works professionally or as a volunteer in the North American Jewish community today.  It provides important and accessible articles about the latest developments in the Jewish community.  The Year Book’s successful re-emergence under Dashefsky and Sheskin is great news all around!
Laurence Kotler-Berkowitz, Senior Director, Research and Analysis, The Jewish Federations of North America

The new American Jewish Year Book is both the “volume of record” for the American Jewish community and an essential resource for everyone engaged in Jewish communal life.  Its review articles are dependably authoritative, and its lists and bibliographies come in handy throughout the year.  Impossible to live without it! Jonathan D. Sarna, President, Association for Jewish Studies; Joseph H. & Belle R. Braun Professor of American Jewish History, Brandeis University

Arnold Dashefsky, Ph.D. served as the inaugural holder of the Doris and Simon Konover Chair of Judaic Studies and professor of sociology at the University of Connecticut in Storrs, where he is now emeritus. He is the co-author, editor or co-editor of nine books, including Americans Abroad, Charitable Choices, Ethnic Identification Among American Jews, among others, as well as numerous scholarly articles. A former Associate Head of the Sociology Department, he was the founding Director of the Center for Judaic Studies and Contemporary Jewish Life, located in the Thomas J. Dodd Research Center at the University of Connecticut, and is the Director Emeritus and Senior Academic Consultant of the Berman Jewish DataBank.

Ira M. Sheskin, Ph.D. is the Director of the Jewish Demography Project of the Sue and Leonard Miller Center for Contemporary Judaic Studies at the University of Miami and Professor and Chair of Geography at the same institution. He has completed 43 major Jewish community studies for Jewish Federations throughout the country and was a member of the National Technical Advisory Committee of the Jewish Federations of North America from 1988 to 2003 which completed both the 1990 and 2000-01 National Jewish Population Surveys. His publications include books entitled Survey Research for Geographers, How Jewish Communities Differ and Comparisons of Jewish Communities: A Compendium of Tables and Bar Charts.