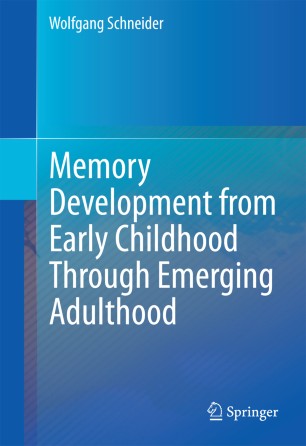 Memory is intimately involved with higher cognitive functions such as decision making and problem solving. It is front and center even in the most basic workings of the human mind. These multiple connections make memory a more diversified entity than we once thought it to be. But how does this all evolve in the individual, and over how long a time?

Memory Development from Early Childhood Through Emerging Adulthood reviews current insights into ongoing and newer areas of developmental memory studies as well as innovations in testing, experimental design, and modeling. Chapters focus on pre-verbal and verbal memory, visuospatial memory, encoding and retrieval strategies, metamemory, and other core elements, locating their emergence from early infancy through emerging adulthood. The book's range of theories and findings carries considerable implications for study areas as varied as brain-behavior connections, children's learning styles, and the effects of early experiences on the developing psyche.

Adulthood is an essential resource for researchers, graduate students, and clinicians/scientist-practitioners in developmental and cognitive psychology as well as related mental and educational disciplines.

Wolfgang Schneider is currently Professor of Psychology at the Department of Psychology, University of Würzburg, Germany. He received his Ph.D. in Psychology from the University of Heidelberg in 1979. His research interests include the development of memory and metacognition, giftedness and expertise, the development of reading and spelling as well as the prevention of reading and math difficulties. He was Vice President and President of the German Psychological Society (2000-2004) and also Vice President of the University of Würzburg (2004-2009). He is author and (co-) editor of about 40 books, including the volume co-authored with Michael Pressley on Memory Development between Two and Twenty and (co-) authored about 350 journal articles and book chapters. Professor Schneider is currently President of the International Society for the Study of Behavioral Development (ISSBD).

“The book provides an important discussion on the interaction of implicit and explicit memory. … it is unquestionably an excellent resource for graduate students, researchers, and practitioners. … the book provides an excellent review of the development of memory while noting important debates and controversies within the field. … Anyone planning to teach a course in memory development will want to give this book very serious consideration.” (Stephen J. Ceci, Kayla A. Burd and Karen Ojeda, PsycCRITIQUES, Vol. 60 (33), August, 2015)