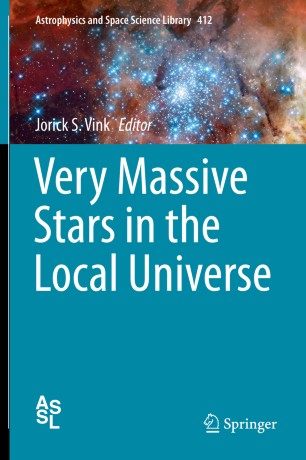 This book presents the status of research on very massive stars in the Universe. While it has been claimed that stars with over 100 solar masses existed in the very early Universe, recent studies have also discussed the existence and deaths of stars up to 300 solar masses in the local Universe. This represents a paradigm shift for the stellar upper-mass limit, which may have major implications far beyond the field of stellar physics.

The book comprises 7 chapters, which describe this discipline and provide sufficient background and introductory content for graduate (PhD) students and researchers from different branches of astronomy to be able to enter this exciting new field of very massive stars.

Jorick Vink is a Senior Research Astronomer at Armagh Observatory, Northern Ireland. His primary research interests include mass loss from massive stars as a function of metallicity, line polarimetry to probe circumstellar geometries in massive evolved as well as young stars (as to study star formation), and in Horizontal Branch morphologies.
Dr. Vink organized the Joint Discussion "Very massive stars in the local universe", which took place at the IAU General Assembly 2012 in Beijing, and where international top specialist in the field presented and discussed their research.