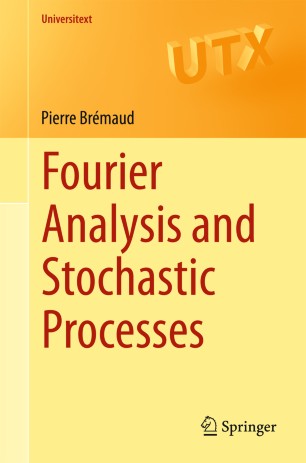 This work is unique as it provides a uniform treatment of the Fourier theories of functions (Fourier transforms and series, z-transforms), finite measures (characteristic functions, convergence in distribution), and stochastic processes (including arma series and point processes).

It emphasises the links between these three themes. The chapter on the Fourier theory of point processes and signals structured by point processes is a novel addition to the literature on Fourier analysis of stochastic processes. It also connects the theory with recent lines of research such as biological spike signals and ultrawide-band communications.

Although the treatment is mathematically rigorous, the convivial style makes the book accessible to a large audience. In particular, it will be interesting to anyone working in electrical engineering and communications, biology (point process signals) and econometrics (arma models).

A careful review of the prerequisites (integration and probability theory in the appendix, Hilbert spaces in the first chapter) make the book self-contained. Each chapter has an exercise section, which makes Fourier Analysis and Stochastic Processes suitable for a graduate course in applied mathematics, as well as for self-study.