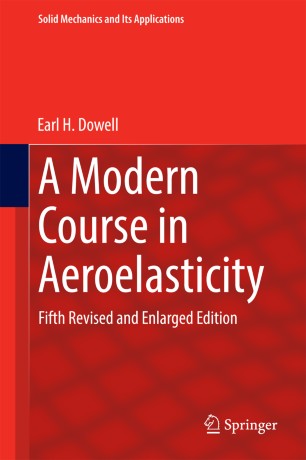 A Modern Course in Aeroelasticity

Part of the Solid Mechanics and Its Applications book series (SMIA, volume 217)

This book cover the basics of aeroelasticity or the dynamics of fluid-structure interaction. While the field began in response to the rapid development of aviation, it has now expanded into many branches of engineering and scientific disciplines and treat physical phenomena from aerospace engineering, bioengineering, civil engineering, and mechanical engineering in addition to drawing the attention of mathematicians and physicists.

The basic questions addressed are dynamic stability and response of fluid structural systems as revealed  by both linear and nonlinear mathematical models and correlation with experiment. The use of scaled models and full scale experiments and tests play a key role where theory is not considered sufficiently reliable.

In this new edition the more recent literature on nonlinear aeroelasticity has been brought up to date and the opportunity has been taken to correct the inevitable typographical errors that the authors and our readers have found to date. The early chapters of this book may be used for a first course in aeroelasticity taught at the senior undergraduate or early graduate level and the later chapters may serve as the basis for a more advanced course, a graduate research seminar or as reference to provide an entree to the current research literature.