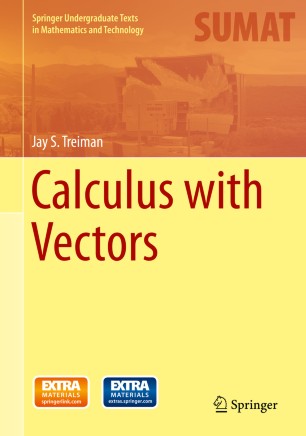 Calculus with Vectors grew out of a strong need for a beginning calculus textbook for undergraduates who intend to pursue careers in STEM. fields. The approach introduces vector-valued functions from the start, emphasizing the connections between one-variable and multi-variable calculus. The text includes early vectors and early transcendentals and includes a rigorous but informal approach to vectors. Examples and focused applications are well presented along with an abundance of motivating exercises. All three-dimensional graphs have rotatable versions included as extra source materials and may be freely downloaded and manipulated with Maple Player; a free Maple Player App is available for the iPad on iTunes.

The approaches taken to topics such as the derivation of the derivatives of sine and cosine, the approach to limits, and the use of "tables" of integration have been modified from the standards seen in other textbooks in order to maximize the ease with which students may comprehend the material. Additionally, the material presented is intentionally non-specific to any software or hardware platform in order to accommodate the wide variety and rapid evolution of tools used. Technology is referenced in the text and is required for a good number of problems.