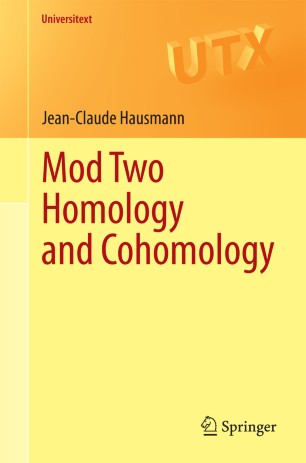 Cohomology and homology modulo 2 helps the reader grasp more readily the basics of a major tool in algebraic topology. Compared to a more general approach to (co)homology this refreshing approach has many pedagogical advantages:

Mod 2 (co)homology was developed in the first quarter of the twentieth century as an alternative to integral homology, before both became particular cases of (co)homology with arbitrary coefficients.

The first chapters of this book may serve as a basis for a graduate-level introductory course to (co)homology. Simplicial and singular mod 2 (co)homology are introduced, with their products and Steenrod squares, as well as equivariant cohomology. Classical applications include Brouwer's fixed point theorem, Poincaré duality, Borsuk-Ulam theorem, Hopf invariant, Smith theory, Kervaire invariant, etc. The cohomology of flag manifolds is treated in detail (without spectral sequences), including the relationship between Stiefel-Whitney classes and Schubert calculus. More recent developments are also covered, including topological complexity, face spaces, equivariant Morse theory, conjugation spaces, polygon spaces, amongst others. Each chapter ends with exercises, with some hints and answers at the end of the book.

Jean-Claude Hausmann is honorary professor of Mathematics at the University of Geneva. His domains of interest include topology of high-dimensional manifolds, with applications to configuration spaces inspired by topological robotics and Hamiltonian geometry.

“The resulting book offers a good introduction to the way the subject works, including coverage of classical topics such as duality as well as the use of Steenrod operations in stable and unstable homotopy theory. … The coverage of the subject is wide and some topics were probably not available previously in an introductory text. … Overall this is a welcome addition to the literature and provides a good introduction to many aspects of the subject … .” (Andrew J. Baker, Mathematical Reviews, January, 2016)
Buy options