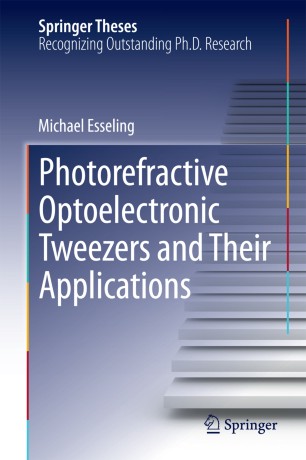 Photorefractive Optoelectronic Tweezers and Their Applications

In the never-ending quest for miniaturization, optically controlled particle trapping has opened up new possibilities for handling microscopic matter non-invasively. This thesis presents the application of photorefractive crystals as active substrate materials for optoelectronic tweezers. In these tweezers, flexible optical patterns are transformed into electrical forces by a photoconductive material, making it possible to handle matter with very high forces and high throughput. Potential substrate materials’ properties are investigated and ways to tune their figures-of-merit are demonstrated. A large part of the thesis is devoted to potential applications in the field of optofluidics, where photorefractive optoelectronic tweezers are used to trap, sort and guide droplets or particles in microfluidic channels, or to shape liquid polymers into optical elements prior to their solidification. Furthermore, a new surface discharge model is employed to discuss the experimental conditions needed for photorefractive optoelectronic tweezers.

After receiving his diploma degree in Physics from the University of Münster for a project on microfluidics, Michael Esseling moved into the field of micro-particle manipulation and obtained his PhD in the group of Prof. Cornelia Denz in 2014 for his thesis "Photorefractive Optoelectronic Tweezers and Their Applications". His further research interests include the use photophoretic forces and accurately shaped light fields - so-called bottle beams - for handling absorbing matter on the microscale.