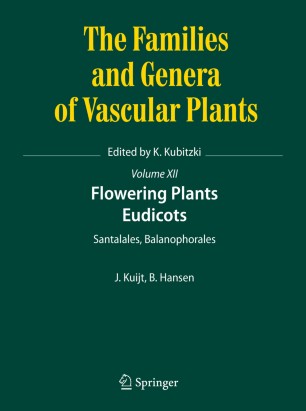 Part of the The Families and Genera of Vascular Plants book series (FAMILIES GENERA, volume 12)

In the present volume taxonomic treatments including descriptions of and keys to the families and genera for the orders Santalales and Balanophorales are offered, the former group here comprising 12 families with 162 genera and about 2100 species, and the latter with the single family Balanophoraceae composed of 16 genera and about 42 species. The contentious family classification of Santalales has been thoroughly revised against the background of previous classifications as well as available structural and molecular evidence, and also the classification of Balanophoraceae has been carefully updated.

Santalales are predominantly hemiparasites connected with either the branches or the roots of other green land plants, whereas Balanophoraceae are holoparasites that form terrestrial tubers attached to the roots of woody hosts. In both orders, parasitism has led to considerable reductions of the vegetative and reproductive organs and detailed descriptions are given on the initiation of ramal and terrestrial parasitism in Santalales and the haustorial connection and tissue continuity between host and parasite in both groups. The dramatic reduction of the vegetative body in Balanophoraceae, which may lack all vegetative organs typically found in green land plants, has promoted studies in the field of developmental morphology. Thus, the volume not only provides an overview of the diversity of the plant groups treated therein, but also points to the interesting biological peculiarities that have evolved in connection with their singular lifestyle.