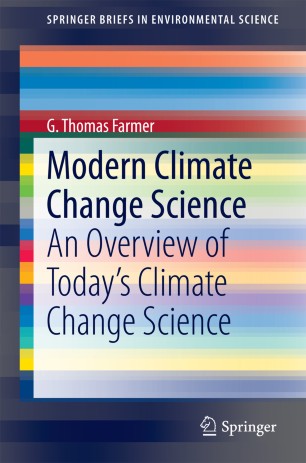 Composed of two extensive sections, this book surveys important work in climate change science, mainly in the United States, and introduces contributions to the body of science that have arrived on the scene between January 2013 and February 2014.

This book can be considered a bridge between the volumes of Farmer and Cook’s Climate Change Science: A Modern Synthesis, as it arrives between the release of the first volume on the Physical Climate (2013) the second, on Earth’s climate history, which is now in preparation.

The book benefits a wide audience as its survey of the science of climate change provides an introduction to the subject and a discussion of current research in the field. The book may be used as a refresher for those who have had prior courses in climate science and related fields. Each chapter includes a comprehensive list of references for subjects discussed in the text.

“It is a most welcome addition to the literature. The text is organized into two chapters: ‘Overview of Climate Change Science’ and ‘Status of Climate Change Research.’ Both short chapters are full of succinct, clearly explained information about the many causes and effects of climate change. … Farmer acknowledges the difficulty of covering such a broad topic in limited space, but he does a good job in accomplishing his goal. Summing Up: Highly recommended. All levels/libraries.” (M. K. Cleaveland, Choice, Vol. 52 (8), April, 2015)