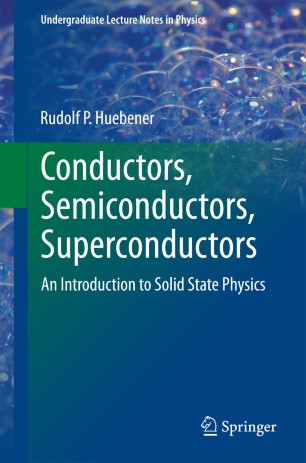 An Introduction to Solid State Physics

In the second half of the last century solid state physics and materials science experienced a great advance and established itself as an important and independent new field.
This book provides an introduction to the fundamentals of solid state physics, including a description of the key people in the field and the historic context. The book concentrates on the electric and magnetic properties of materials. It is written for students up to the bachelor in the fields of physics, materials science, and electric engineering. Because of its vivid explanations and its didactic approach, it can also serve as a motivating pre-stage and supporting companion in the study of the established and more detailed textbooks of solid state physics. The book is suitable for a quick repetition prior to examinations.
For his scientific accomplishments, in 1992 the author received the Max-Planck Research Price and in 2001 the Cryogenics Price. He studied physics and mathematics at the University of Marburg, as well at the Technical Universities of Munich and Darmstadt. In 1958 he obtained his PhD in experimental physics at the University of Marburg. After working at the Research Center Karlsruhe and at a research institute near Albany, New York, he worked for 12 years at the Argonne National Laboratory near Chicago, Illinois. In 1974 he accepted an appointment at a chair of Experimental Physics at the University of Tübingen. There he taught and performed research until his retirement in 1999.