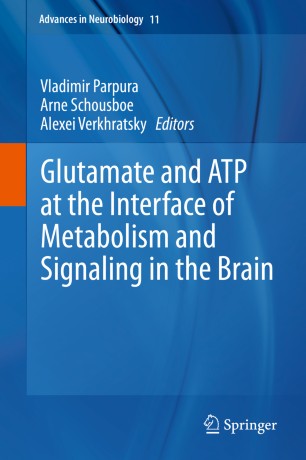 Part of the Advances in Neurobiology book series (NEUROBIOL, volume 11)

ATP was naturally selected very early on as the main source of biological energy, and thus became an indispensable feature of life on the Earth. This was a critical evolutionary choice because it shaped enzymatic systems to utilize ATP in energy-dependent reactions and necessitated an appearance of the universal intracellular signaling system based on calcium ions; keeping cytosolic Ca2+ extremely low became vitally important, since otherwise insoluble Ca2+-phosphates would preclude the cell energetics. Thus, all living cells on the Earth, beginning from the most primitive ones, had high cytosolic concentrations of ATP and there is little surprise that ATP was soon utilized by nature for another fundamental function of sending information from one living cell to another. In summary, ATP acts as the main energy source and is pivotal for numerous signaling cascades both inside (by fueling various transport systems and donating phosphate groups) and between the cells (by chemical transmission). Similarly, glutamate acts as an important molecule for both intercellular signaling through glutamatergic transmission and cell energetics by contributing to ATP production.

In this collection of chapters, written by the leading experts in the fields of cell metabolism and energetics, intracellular signaling and neurotransmission, we covered various aspects of the interfacing between these two fundamental molecules. This book will be particularly useful for researchers, students, physicians and psychotherapists working in the field of neurobiology, neurology and psychiatry.