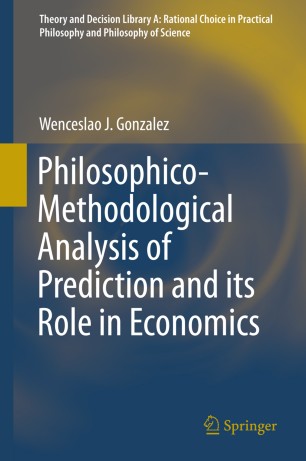 Philosophico-Methodological Analysis of Prediction and its Role in Economics

Part of the Theory and Decision Library A: book series (TDLA, volume 50)

This book develops a philosophico-methodological analysis of prediction and its role in economics. Prediction plays a key role in economics in various ways. It can be seen as a basic science, as an applied science, and in the application of this science. First, it is used by economic theory in order to test the available knowledge. In this regard, prediction has been presented as the scientific test for economics as a science. Second, prediction provides a content regarding the possible future that can be used for prescription in applied economics. Thus, it can be used as a guide for economic policy, i.e., as knowledge concerning the future to be employed for the resolution of specific problems. Third, prediction also has a role in the application of this science in the public arena. This is through the decision-making of the agents — individuals or organizations — in quite different settings, both in the realm of microeconomics and macroeconomics.

Within this context, the research is organized in five parts, which discuss relevant aspects of the role of prediction in economics: I) The problem of prediction as a test for a science; II) The general orientation in methodology of science and the problem of prediction as a scientific test; III) The methodological framework of social sciences and economics: Incidence for prediction as a test; IV) Epistemology and methodology of economic prediction: Rationality and empirical approaches; and V) Methodological aspects of economic prediction: From description to prescription. Thus, the book is of interest for philosophers and economists as well as policy-makers seeking to ascertain the roots of their performance. The style used lends itself to a wide audience.