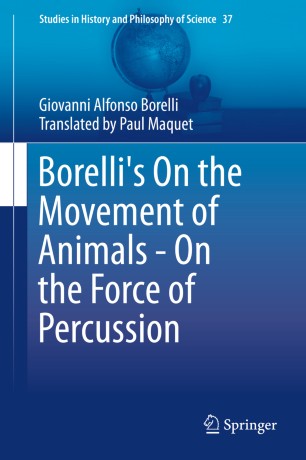 Borelli's On the Movement of Animals - On the Force of Percussion

Part of the Studies in History and Philosophy of Science book series (AUST, volume 37)

This volume provides an introduction to Borelli’s theory on the movement of animals and demonstrates the nature of the energy of percussion, its causes, properties and effects. Building on and moving away from the theory of mechanics as formulated by Aristotle and Galileo, and countering objections expressed by Stephani degli Angeli among others, Borelli presents a completely mechanical account of the action of muscles, and analyzes the way in which the center of gravity of the animal shifts in locomotion.

This volume is the first of two volumes that contain the Introduction and physical-mathematical illustrations necessary to understand Giovanni Alfonso Borelli’s work On the Movement of Animals, the founding text of seventeenth century biomechanics. The second volume, entitled On The Natural Motions Resulting From Gravity, describes his theory and scientific experiments relating to the natural movements of bodies in a fluid environment.

Galileo and Stevin Giovanni Alfonso Borelli How can an accelerated movement be generated Jan Broen, Leiden Magnificent De Motu Animalium Natural Motions Peter Van der Aa Principles of movement Properties and actions of the motive virtue The force of percussion The nature of movement Why a magnet attracts iron