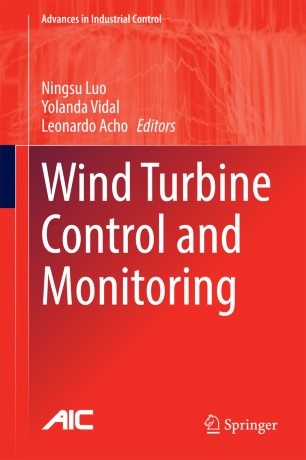 Featuring analysis from leading experts and researchers in the field, the book provides new understanding, methodologies and algorithms of control and monitoring, computer tools for modeling and simulation, and advances the current state-of-the-art on wind turbine monitoring and fault diagnosis; power converter systems; and cooperative & fault-tolerant control systems for maximizing the wind power generation and reducing the maintenance cost.

This book is primarily intended for researchers in the field of wind turbines, control, mechatronics and energy; postgraduates in the field of mechanical and electrical engineering; and graduate and senior undergraduate students in engineering wishing to expand their knowledge of wind energy systems. The book will also interest practicing engineers dealing with wind technology who will benefit from the comprehensive coverage of the theoretic control topics, the simplicity of the models and the use of commonly available control algorithms and monitoring techniques.

Ningsu Luo is Professor of Control Systems Engineering at Department of Electrical Engineering, Electronics and Automatic Control, University of Girona, Spain. He obtained his PhD in Control Engineering from Southeast University in 1990 and PhD in Physics Science from University of the Basque Country in 1994, respectively. His current research activities are focused on modeling, identification and control design for systems with complex dynamics, with application to control and monitoring of offshore floating wind turbines, mobile robotics, sustainable tillage, mechatronic systems, biomedical processes, active and semi-active control techniques for vibration mitigation in civil engineering structures and automotive suspension systems.

Yolanda Vidal was born in Baleares, Spain, in 1977. She received the B.E. degree in mathematics in 1999 and the Ph.D. degree in Applied Mathematics in 2005 from the Universitat Politècnica de Catalunya (UPC), Barcelona, Spain. Since 2002 she has been with the Department of Applied Mathematics III of the UPC where she became an associate professor in 2009. Her current research activities are focused on modeling and control design, fault detection and isolation systems with application to control and monitoring of wind turbines.

Leonardo Acho was born in the State of Mexico, Mexico, in 1967. He received the B.E. degree in electronics engineering from the Technology Institute of Monterrey (ITESM), Monterrey, Mexico, in 1989; and the M.Sc. and Ph.D. degrees in electronics and automatic control, from the Technology Institute of Monterrey (ITESM), Monterrey, Mexico, and from the Research Center of Ensenada (CICESE), México, in 1992 and 2002, respectively. Since February 2008, he has been with the Department of Applied Mathematics III of the Polytechnic University of Catalonia (UPC), Spain, where he was a Visiting Professor, and became an associate professor in 2009. His current research interests include control theory, nonlinear systems, and chaos engineering.