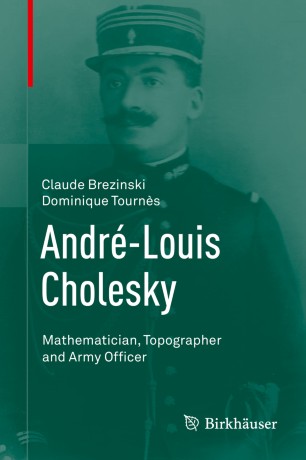 Outside the professional circles of topography and applied mathematics, the life and work of André-Louis Cholesky (1875–1918) are still relatively unknown to the scientific community. This new book appreciably widens the exposure of his remarkable personal achievements in topography and mathematics to a much larger international audience.

Cholesky is also interesting to historians because he is a perfect representative of the "scientists engineers" that, since the early 19th century, had issued from the French scientific high schools. Because they had received a high level of mathematical education, they were able to innovate in their practice of engineering. In the case of Cholesky, this resulted in original contributions in artillery, topography, numerical analysis and graphical calculation.

In addition, the book places his education and works within the history of several European countries through the 17th to 19th centuries.

The book begins with Cholesky's biography, followed by his family’s history and an introduction to topography. It continues with a historical analysis of an unpublished paper (translated into English) in which Cholesky explained his method for linear systems. Cholesky's other works are then described, such as his participation in teaching at a superior "school by correspondence" founded by Léon Eyrolles. His important unpublished book in French on graphical calculation, which is reproduced in its entirety, is analyzed in detail and compared to similar contemporary publications. The biography of Ernest Benoit, who wrote the first paper on Cholesky's method, is provided. Various documents, highlighting the life and the personality of Cholesky, round out his story and end the book.

Dominique Tournès is professor of mathematics and history of mathematics at the University of La Réunion (Laboratory of Mathematics and Computer Science, EA 2525), France and associate researcher at the SPHERE laboratory (UMR 7219, CNRS and University Paris-Diderot, France). His work focuses on the history of calculation methods and instruments since the seventeenth century, particularly regarding differential equations.

“The volume represents a valuable contribution to the growing literature on the history of applied and computational mathematics … . the book will be of interest to applied mathematicians with a curiosity about historical matters, and to professional historians of science who specialize in the history of ‘practical mathematics,’ topography, geodesy, and computing methods.” (Michele Benzi, The Mathematical Intelligencer, Vol. 39, 2017)

“A nicely illustrated book, many photographs appear of Cholesky, often in military uniform, his family, colleagues and contemporaries. The topographical terms and techniques are well described … . Cholesky was very practical and resourceful. … A very stimulating and engaging book, a motivation to further research of the techniques considered.” (Wallace A. Ferguson, Mathematics Today, Vol. 52 (2), April, 2016)

“The book should appreciably widen the exposure of Cholesky’s ‘remarkable personal achievements in topography and mathematics to a much larger international audience.’ The authors succeed very well to reach this aim. … The book is very readable and can be recommended especially to readers with interest in the history of numerical and applied mathematics.” (Karl-Heinz Schlote, zbMATH 1320.01002, 2015)