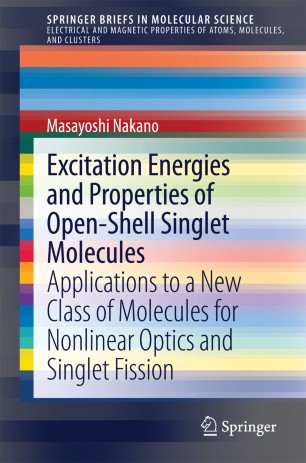 Also part of the SpringerBriefs in Electrical and Magnetic Properties of Atoms, Molecules, and Clusters book sub series (BRIEFSMAGNET)

This brief investigates the diradical character, which is one of the ground-state chemical indices for "bond weakness" or "electron correlation" and which allows researchers to explore the origins of the electron-correlation-driven physico-chemical phenomena concerned with electronic, optical and magnetic properties as well as to control them in the broad fields of physics and chemistry. It then provides the theoretical fundamentals of ground and excited electronic structures of symmetric and asymmetric open-shell molecular systems by using model molecular systems. Moreover, it presents the theoretical design guidelines for a new class of open-shell singlet molecular systems for nonlinear optics (NLO) and singlet fission.

Masayoshi Nakano was born on January 16, 1964 in Osaka, Japan and has obtained an M. Eng. in 1988 and Ph.D. in 1991 in Chemical Engineering at Osaka University. The subject of his Ph.D. thesis was “Theoretical Studies on the Nonlinear-Optical Properties of Organic Substances”. During 1991-1992, he stayed with Prof. Keiichiro Nasu at the Institute for Molecular Science (IMS) (as JSPS Research Fellowships for Young Scientists). In 1992, he served as a research associate, in 2002 an associate professor, under the direction of Prof. Kizashi Yamaguchi in Department of Chemistry, Osaka University. In 1998, he received the 47th Young Scientist Award from the Chemical Society of Japan for “Development of non-perturbative calculation method and hyperpolarizability density analysis and molecular design of novel nonlinear optical compounds”. Since 2005, he is Professor at the Department of Materials Engineering Science, Osaka University. His research interests are quantum chemical study on the ground/excited state electronic structures and dynamics of open-shell molecular systems including nonlinear optical molecules and molecular aggregates, exciton dynamics of supramolecular systems including dendritic systems, singlet fission and quantum dynamics between atomic/molecular systems and quantized optical field using dissipative quantum mechanics. He received the “Research Excellence Award” from the European Society of Computational Methods in Science and Engineering (ESCMSE) in 2007. He has published over 250 original papers.