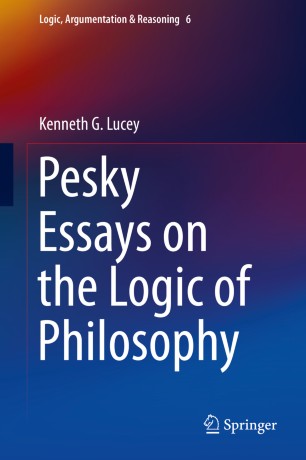 Pesky Essays on the Logic of Philosophy

This collection of essays explores the philosophy of human knowledge from a multitude of perspectives, with a particular emphasis upon the justification component of the classical analysis of knowledge, and with an excursion along the way to explore the role of knowledge in Texas Hold ‘Em poker.

An important theme of the collection is the role of knowledge in religion, including a detailed argument for agnosticism. A number of the essays touch upon issues in philosophical logic, among them a fascinating new counter-example to Modus Ponens. The collection is rounded out with essays on causality and the philosophy of mind.

The author’s perspective on the philosophy of human knowledge is fresh and challenging, as evidenced by essays entitled “On Epistemic Preferability;” “On Being Unjustified;” “The Logic of ‘Unless’” and “Is ‘This sentence is true.’ True?”

An interesting feature of The Logic of Philosophy: Pesky Essays is the inclusion of responses to several of its key essays, contributed by such prominent contemporary philosophers as Roderick Chisholm, Ted Sider and Tomas Kapitan.

Kenneth Lucey is Sanford Distinguished Professor of the Humanities at the University of Nevada, Reno, U.S.A. He is a philosophical generalist with wide interests in epistemology, metaphysics, philosophy of religion and philosophical logic.