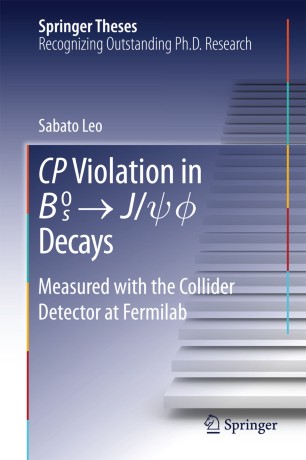 Measured with the Collider Detector at Fermilab

This thesis reports on the final measurement of the flavor-mixing phase in decays of strange-bottom mesons (B_s) into J/psi and phi mesons performed in high-energy proton-antiproton collisions recorded by the Collider Experiment at Fermilab.Interference occurs between direct decays and decays following virtual particle-antiparticle transitions (B_s-antiB_s). The phase difference between transition amplitudes (“mixing phase”) is observable and extremely sensitive to contributions from non-standard-model particles or interactions that may be very hard to detect otherwise – a fact that makes the precise measurement of the B_s mixing phase one of the most important goals of particle physics.The results presented include a precise determination of the mixing phase and a suite of other important supplementary results. All measurements are among the most precise available from a single experiment and provide significantly improved constraints on the phenomenology of new particles and interactions.

Leo Sabato obtained his PhD at University of Pisa in 2013. In 2008 he joined the Collider Detector Facility experiment, located in Batavia (ILLINOIS), 35 miles far from Chicago. In July 2012 I relocated to CERN, Switzerland, where he worked for about a year at the LHCb experiment within the HLT trigger group. Currently, as of April 2014, he is a Post Doctoral Research Associate at University of Illinois at Urbana-Champaign. The focus of his research is the new G-2 experiment at Fermilab, where he continues to be involved in CDF analysis.