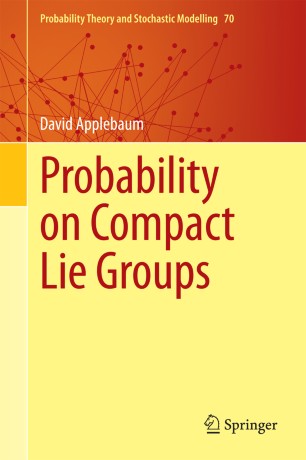 Probability theory on compact Lie groups deals with the interaction between “chance” and “symmetry,” a beautiful area of mathematics of great interest in its own sake but which is now also finding increasing applications in statistics and engineering (particularly with respect to signal processing). The author gives a comprehensive introduction to some of the principle areas of study, with an emphasis on applicability. The most important topics presented are: the study of measures via the non-commutative Fourier transform, existence and regularity of densities, properties of random walks and convolution semigroups of measures, and the statistical problem of deconvolution. The emphasis on compact (rather than general) Lie groups helps readers to get acquainted with what is widely seen as a difficult field but which is also justified by the wealth of interesting results at this level and the importance of these groups for applications.

The book is primarily aimed at researchers working in probability, stochastic analysis and harmonic analysis on groups. It will also be of interest to mathematicians working in Lie theory and physicists, statisticians and engineers who are working on related applications. A background in first year graduate level measure theoretic probability and functional analysis is essential; a background in Lie groups and representation theory is certainly helpful but the first two chapters also offer orientation in these subjects.

David Applebaum is Professor of Mathematics at the University of Sheffield, UK. He was educated at St Andrews and Nottingham Universities and has previously worked at Nottingham Trent University, UK. He is the author of over 70 published research papers and 3 books and is currently an associate editor for 3 journals. Most of his research is in the area of probability and stochastic analysis with an emphasis on stochastic processes with jumps (Levy processes), stochastic differential and partial differential equations and processes taking value in Lie groups and manifolds. He has also worked on quantum stochastic processes.