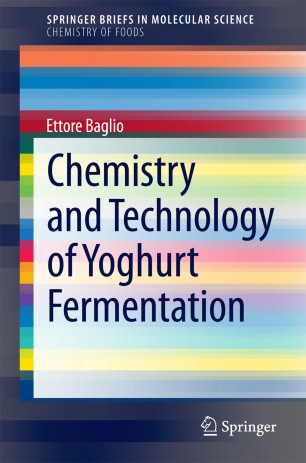 Chemistry and Technology of Yoghurt Fermentation

This Brief reviews the chemistry behind the production of yoghurt through acidification of milk. It quantifies the changes in physical and chemical properties of yoghurt during fermentation with microbial organisms (such as Lactobacillus bulgaricus and Streptococcus thermophilus). It has been found that this symbiosis has an optimal development at a temperature of ca. 45°C with the transformation of lactose into lactic acid and small amounts of acetaldehyde, diacetyl and volatile acids. This Brief explains the chemical and physical results of the fermentation process, such as precipitation of proteins and the acid coagulation of milk with a clot formation in the final semi-solid mass. The Brief sheds light on the accomplishments of the fermenting organisms: they are responsible for the biochemical reactions of carbohydrate metabolism, proteolysis, lipolysis and flavour production in the process of yoghurt production. It also briefly reviews formulations and food additives used in the modern yoghurt producing industry.