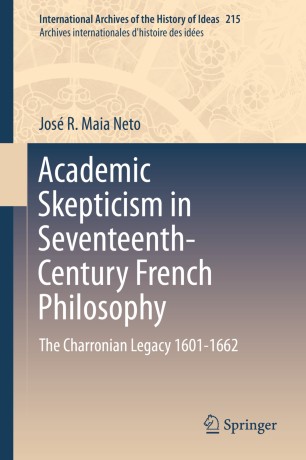 This book is the first systematic account of Pierre Charron’s influence among the major French philosophers in the period (1601-1662). It shows that Charron’s Wisdom was one of the main sources of inspiration of Pierre Gassendi’s first published book, the Exercitationes adversus aristoteleos. It sheds new light on La Mothe Le Vayer, who is usually viewed as a major free thinker. By showing that he was a follower of Charron, La Mothe emerges neither as a skeptical apologist nor as a disguised libertine, as combatting superstition but not as irreligious. The book shows the close presence of Charron in the preambles of Descartes’ philosophy and that the cogito is mainly based on the moral Academic self-assurance of Charron’s wise man. This interpretation reverses the standard view of Descartes’ relation to skepticism. Once this skepticism is recognized to be Charron’s Academic one, it is seen not as the target but as the source of the cogito. Pascal is the last major philosopher for whom Charron’s wisdom is crucially relevant. Montaigne and Descartes influenced, respectively, Pascal’s view of the Pyrrhonian skeptic and of the skeptical main arguments. The book shows that Charron’s Academic skeptical wise man is one of the main targets of his projected apology for Christianity, since he considered him as a threat and counter-example of the kind of Christian view of human beings he believed. By restoring the historical philosophical relevance of Charron in early modern philosophy and arguing for the relevance of Academic skepticism in the period, this book opens a new research program to early modern scholars and will be valuable for those interested in the history of philosophy, French literature and religion.