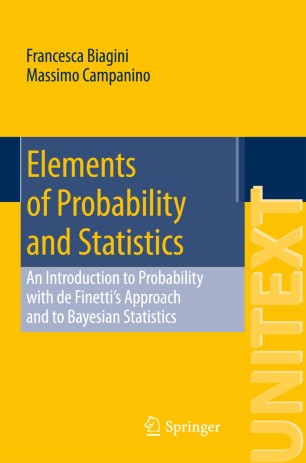 Elements of Probability and Statistics

This book provides an introduction to elementary probability and to Bayesian statistics using de Finetti's subjectivist approach. One of the features of this approach is that it does not require the introduction of sample space – a non-intrinsic concept that makes the treatment of elementary probability unnecessarily complicate – but introduces as fundamental the concept of random numbers directly related to their interpretation in applications. Events become a particular case of random numbers and probability a particular case of expectation when it is applied to events. The subjective evaluation of expectation and of conditional expectation is based on an economic choice of an acceptable bet or penalty. The properties of expectation and conditional expectation are derived by applying a coherence criterion that the evaluation has to follow. The book is suitable for all introductory courses in probability and statistics for students in Mathematics, Informatics, Engineering, and Physics.

Massimo Campanino was born on 1952. On 1975 he got the degree on Mathematics at the University of Rome, Italy, under the supervisorship in Mathematics under the supervisorship of prof. Bruno de Finetti. Since 1990 he is full Professor of Probability at the University of Bologna, Italy. He has been visitor at I. H. E. S. of Bures-sur-Yvette (France), at the University of Princeton and at the University of California Irvine. He has performed research on random fields, dynamical systems random processes, systems with random potential and in random environment, percolation. He is the author of works in collaboration with H. Epstein and D. Ruelle where the existence of a solution of Feigenbaum’s functional equation, related to the universal behaviour of one-dimensional dynamical systems, was first proved. In works in collaboration with D. Ioffe he proved the Ornstein-Zernike behaviour for Bernoulli percolation below the critical probability and then with D. Ioffe and Y. Velenik for finite range Ising models. He has been national coordinator of the 2006 Prin project "Percolation, random fields, evolution of stochastic interacting systems" and of the 2009 Prin project "Random fields, percolation and stochastic.

“The authors are to be commended for their attempt to show that de Finetti's approach can in fact be used successfully in introducing and developing probability theory.” (A. I. Dale, Mathematical Reviews, November, 2016)
Buy options