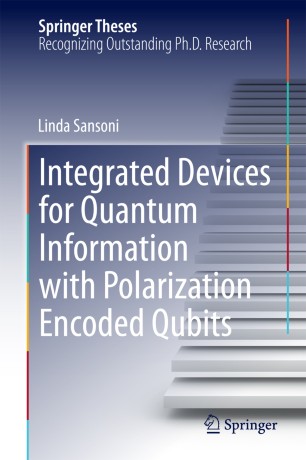 Quantum information science has found great experimental success by exploiting single photons. To date, however, the majority of quantum optical experiments use large-scale (bulk) optical elements bolted down to an optical bench, an approach that ultimately limits the complexity and stability of the quantum circuits required for quantum science and technology. The realization of complex optical schemes involving large numbers of elements requires the introduction of waveguide technology to achieve the desired scalability, stability and miniaturization of the device. This thesis reports on surprising findings in the field of integrated devices for quantum information. Here the polarization of the photon is shown to offer a suitable degree of freedom for encoding quantum information in integrated systems. The most important results concern: the quantum interference of polarization entangled photons in an on-chip directional coupler; the realization of a Controlled-NOT (CNOT) gate operating with polarization qubits; the realization of a quantum walk of bosons and fermions in an ordered optical lattice; and the quantum simulation of Anderson localization of bosons and fermions simulated by polarization entangled photons in a disordered quantum walk. The findings presented in this thesis represent an important step towards the integration of a complete quantum photonic experiment in a chip.

Linda Sansoni graduated in 2009 in the Quantum Optics Group at Sapienza Università di Roma with a thesis on Orbital Angular Momentum of light, then continued with her PhD research in the same group, focussing on the field of integrated devices for quantum information. She gained her PhD in February 2013 and continued her research on integrated devices as post doc in the same group. She is now well known in this field being co author of various high impact journal publications. In November 2013 she moved to the University of Paderborn in Germany, where she is working on nonlinear integrated optics for quantum information.