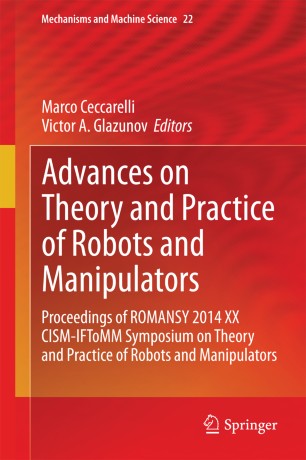 Advances on Theory and Practice of Robots and Manipulators

ROMANSY 2014 is the twentieth event in a series that started in 1973 as one of the first conference activities in the world on Robotics. The first event was held at CISM (International Centre for Mechanical Science) in Udine, Italy on 5-8 September 1973. It was also the first topic conference of IFToMM (International Federation for the Promotion of Mechanism and Machine Science) and it was directed not only to the IFToMM community.

Proceedings volumes of ROMANSY have been always published to be available, also after the symposium, to a large public of scholars and designers with the aim to give an overview of new advances and trends in the theory, design, and practice of robots.

This proceedings volume, like previous ones of the series, contains contributions with achievements covering many fields of Robotics as Theory and Practice of Robots and Manipulators that can be an inspiration for future developments.