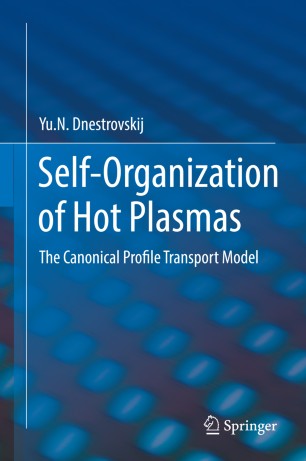 This book is devoted to the problem of confinement of energy and particles in tokamak plasmas. The author presents the Canonical Profile Transport Model or CPTM as a rather general mathematical framework to simulate plasma discharges.
The description of hot plasmas in a magnetic fusion device is a very challenging task and many plasma properties still lack a physical explanation. One important property is plasma self-organization.
It is well known from experiments that the radial profile of the plasma pressure and temperature remains rather unaffected by changes of the deposited power or plasma density. The attractiveness of the CPTM is that it includes the effect of self-organization in the mathematical model without having to recur to particular physical mechanisms.
The CPTM model contains one dimensional transport equations for ion and electron temperatures, plasma density and toroidal rotation velocity. These equations are well established but the expressions for the energy, particle and momentum fluxes, including corresponding critical gradients, are new. These critical gradients can be determined using the concept of canonical profiles for the first time formulated in great detail in the book. This concept represents a totally new approach to the description of transport in plasmas. Mathematically, the canonical profiles are formulated as a variational problem. To describe the temporal evolution of the plasma profiles, the Euler equation defining the canonical profiles is solved together with the transport equations at each time step. The author shows that in this way it is possible to describe very different operational scenarios in tokamaks (L-Mode, H-Mode, Advanced Modes, Radiating Improved Modes etc…), using one unique principle.
The author illustrates the application of this principle to the simulation of plasmas on leading tokamak devices in the world (JET, MAST, T-10, DIII-D, ASDEX-U, JT-60U). In all cases the small differences between the calculated profiles for the ion and electron temperatures and the experimental is rather confirm the validity of the CPTM. In addition, the model also describes the temperature and density pedestals in the H-mode and non steady-state regimes with current and density ramp up. The proposed model therefore provides a very useful mathematical tool for the analysis of experimental results and for the prediction of plasma parameters in future experiments.

Prof. Y.N. Dnestrovskii is a worldwide recognized authority in the field of simulations of fusion plasmas. His ideas have contributed to experiments as well as theory. He is the author of the first one-dimensional model of plasma transport presented at the renowned fusion conference in Dubna, 1969. He designed a flexible transport code to simulate fusion plasmas, incorporating his ideas on plasma self-organization. This code system ASTRA is in use in all major fusion laboratories in the world. He is a member of the famous Tokamak Physics Institute of the National Research Centre Kurchatov Institute in Moscow, where under the leadership of the legendary Lev Artsimovitch, the major developments took place for the tokamak. Also widely are known his works on the propagation of electromagnetic waves in plasmas. In particular, he has shown for the first time that the O-mode of the first harmonics and the X-mode of the second harmonics have the highest absorption in plasma. This important result is applied now in many tokamak experiments to efficiently heat the plasmas with electromagnetic waves in the range 70-150GHz using gyrotrons.

During the eighties he wrote together with Professor D.P. Kostomarov the monograph “Numerical simulation of plasmas” which had two Russian (1982, 1993) and one Springer (1986) edition, in English. He has participated in many International Conferences on Plasma Physics. Since 1995 he leads (from the Russian side) the collaboration between the Culham Centre for Fusion Energy (CCFE) in Culham, UK and the Kurchatov Institute in Moscow, Russia.
At the major bi-annual conference in fusion research, the IAEA Fusion Energy Conference he was invited in 2008 (~ 800 participants) to summarize the theoretical works presented there. His report is published in the leading journal Nuclear Fusion (“Summary of reports presented to magnetic confinement theory and modelling (TH) section: main ideas and achievements”, Nucl. Fusion 49, 104003 (2009)).