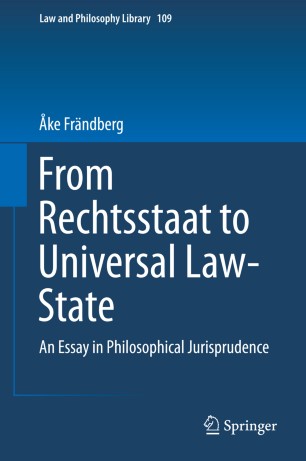 From Rechtsstaat to Universal Law-State

An Essay in Philosophical Jurisprudence

In this book the author investigates what is common to the German idea of the Rechtsstaat and the Anglo-American idea of the Rule of Law. He argues that, although dressed up in rather different garb, these two concepts are in fact based on the same fundamental idea and stand for the same values (“the law-state values”) – all ideas that are in the European tradition older than their British and German variants. The fundamental idea is that the individual shall enjoy legal protection against infringements brought about by the exercise of power on the part of the state. In the book basic concepts such as legality, legal equality, legal certainty, legal accessibility and legal security are investigated. Also explored are their mutual relations, in particular, conflicts between them. Furthermore, the book offers practical advice on realising and sustaining these values in practice. Finally, it is argued that the characteristic law-state values can only be justified by reference to an even more fundamental humanistic idea, namely,  what the author calls “a life of human dignity”.