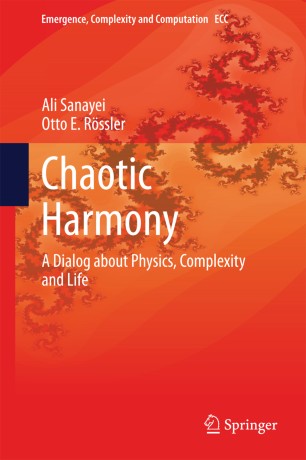 A Dialog about Physics, Complexity and Life

This fascinating book written by Ali Sanayei and Otto E. Rössler is not a classic scientific publication, but a vivid dialogue on science, philosophy and  the interdisciplinary intersections of science and technology with biographic elements. Chaotic Harmony: A Dialog about Physics, Complexity and Life represents a discussion between Otto Rössler and his colleague and student, focusing on the different areas of science and highlights their mutual relations. The book's concept of interdisciplinary dialogue is  unusual nowadays although it has a long tradition in science. It provides insight not only into interesting topics that are often closely linked, but also into the mind of a prominent scientist in the field of physics, chaos and complexity in general. It allows a deep look into the fascinating process of scientific development and discovery and provides a very interesting background of known and unknown facts in the areas of complex processes in physics, cosmology, biology, brains and systems in general. This book will be valuable to all who are interested in science, its evolution and in an unconventional and original look at various issues. Surely it can serve as an inspiration for students, explaining the often overlooked fact that science and philosophy enrich each other.