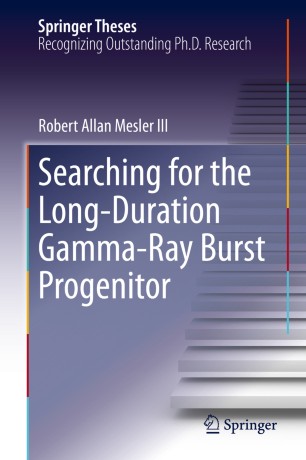 Nominated as an outstanding thesis by the Department of Physics and Astronomy of the University of New Mexico, this thesis seeks to identify the gamma-ray burst (GRB) progenitor.  GRBs are extragalactic explosions that briefly outshine entire galaxies, but the mechanism that can release that much energy over a < 100 second burst is still a mystery.  The leading candidate for the GRB progenitor is currently a massive star which collapses to form a black hole–accretion disk system that powers the GRB.  GRB afterglows, however, do not always show the expected behavior of a relativistic blast wave interacting with the stellar wind that such a progenitor should have produced before its collapse.

In this book, the author uses the Zeus-MP astrophysical hydrodynamics code to model the environment around a stellar progenitor prior to the burst.  He then develops a new semi-analytic MHD and emission model to produce light curves for GRBs encountering these realistic density profiles.  The work ultimately shows that the circumburst medium surrounding a GRB at the time of the explosion is much more complex than a pure wind, and that observed afterglows are entirely consistent with a large subset of proposed stellar progenitors.