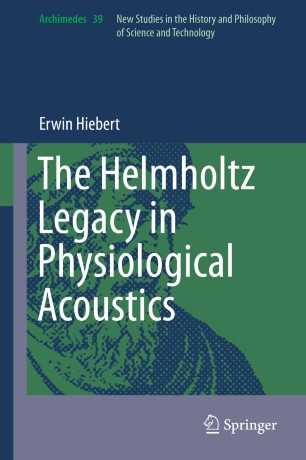 The Helmholtz Legacy in Physiological Acoustics

This book explores the interactions between science and music in the late nineteenth- and early twentieth century. It examines and evaluates the work of Hermann von Helmholtz, Max Planck, Shohé Tanaka, and Adriaan Fokker, leading physicists and physiologists who were committed to understanding crucial aesthetic components of the art of music, including the standardization of pitch and the implementation of various types of intonations. With a mixture of physics, physiology, and aesthetics, author Erwin Hiebert addresses throughout the book how just intonation came to intersect with the history of keyboard instruments and exert an influence on the development of Western music. He begins with the work of Hermann von Helmholtz, a leading nineteenth-century physicist and physiologist who not only made important contributions in vision, optics, electrodynamics, and thermodynamics, but also helped advanced the field of music theory as well. The author traces the Helmholtzian trends of thought that become inherently more complex by reaching beyond the sciences to perform a bridge with aesthetics and the diverse ways in which the human mind interprets or is taught, in different cultures, to interpret and understand music. Next, the author explores the works of other key physicists and physiologists who were influenced by Helmholtz and added to his legacy. He examines Japanese music theory student Shohé Tanaka, who sought to design a harmonium that was not based on equal temperament but rather on just intonation. Dutch physicist Adriaan Daniel Fokker, who arranged for organs to be built based on 31-tones per octave, orchestrated concerts for these new instruments, and even attempted to compose microtonal music, or music whose tonality is based on intervals smaller than the typical twelve semitones of Western music.

“It reflects the work of two decades during which he studied the intertwinings of science and music in the nineteenth and early twentieth century. … the book presents them in the best possible way to facilitate further research. Readers will profit from the rich archival materials that have been translated into English and can easily be traced through the separate bibliographies that conclude each chapter.” (Julia Kursell, Isis, Vol. 107 (3), September, 2016)